The Cutting Cafe Design Team had a "free" week this week, meaning we pick any file from the store to create with. I didn't know which direction to ask, so asked my team members to give me a letter, then a color, and then a number. The letter represented the name of the files I would choose from starting with that letter, the color was to use in my project and the number after having been given a letter, I counted down from the top to pick the file.

So I was given: P, blue, 17...I counted down 17 from all the files starting with P and landed on Penguin Shaped Card. Doesn't seem like the project to create with in April, but oddly enough, it snowed the night before I asked the design team to help me out AND we had a blizzard last week. 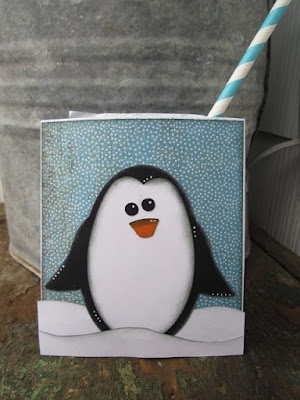 I sealed an envelope and then cut it down from the short side to create a pocket for a hot cocoa packet and fun straw. I also hand cut some white cardstock for snow. I'm hoping this is the last of the snow that I see until late this winter.

Thank you for stopping by and be sure to visit the Cutting Cafe Blog tomorrow to see the design team's projects in which you can leave a comment to be entered into a drawing to win 3 FREE sets of your choice from the online store.
Posted by Debbie Fisher (debbiedee) at 11:44 AM